Rivers to Ranges is a new name to the Hawke’s Bay outdoors person but the shop has a rich history and a well-known owner. Jeremy Hanaray has worked in the fishing and hunting industry for 22 years. He started off right where he is now at what was then Craft & Hern Sports. Jem, as he’s known to his mates, was a keen hunter and fisherman who started the traditional way as the shop junior. He learned the trade from well-respected retailers like Dave Hern, Jim Chote and Derek Ward. In later years Craft & Hern joined the Hunting & Fishing group and then in 2006 allied with Hamills. During this time Jeremy decided that he wanted to run the business and in 2003 bought a share in the shop.

Running a successful store became Jeremy’s passion and after buying out his coowner and with the help of his uncle he took charge of the business. In 2013 Jeremy decided that, based on his experience in the industry, the best way to look after his customers and grow his business was to become an independent operator – and Rivers to Ranges was born. 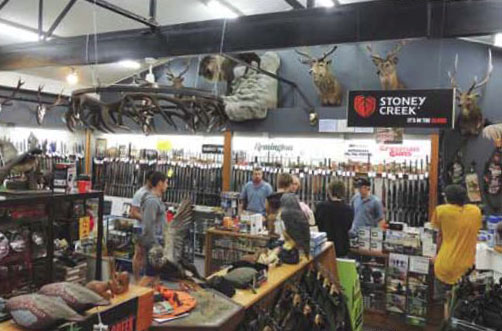 Racks of guns line the walls with a great display of trophy heads above them.

Looking at the shop it’s obvious there’s a real mix of old and new. The store has been in the same Nelson Street South location for a few decades now but Jeremy and his team have added some nice touches to the interior. There’s a great selection of trophy heads on display – including Jeremy’s first trophy red, a 334 Douglas Score 12 pointer. Jeremy saw this animal three times before he was able to take a shot at him. Also on display are a nice 12.7 inch full body tahr and a nice 177DS sika. The head that gets the most comment though is his big Jap. This fella got 3rd place at the 2012 Sika Show and the head stirred up a bit of controversy as to its bloodlines, but was judged a 10/12 on the Withey system. Jeremy says he still gets a few comments about him and enjoys having a chat to customers about the distinctive looks. 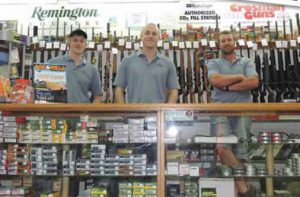 Jeremy (centre) is very proud of his store.

It’s a sad fact that many gun shops just don’t seem to have many pre-owned firearms these days; Rivers to Ranges bucks this trend with a great selection. I asked Jeremy how the second-hand market worked for him. “John, a lot of rubbish ends up on Trade Me, I have my reputation to consider so I carefully inspect my second-hand guns and if there’s an issue I sort it.”

Having been a bit of a gun shop groupie in my day, there’s something pleasing about a shop that not only has racks full of new rifles but also a good selection of second-hand guns as well. It’s a sad fact that many gun shops just don’t seem to have many pre-owned firearms these days; Rivers to Ranges bucks this trend with a great selection. I asked Jeremy how the second-hand market worked for him. “John, a lot of rubbish ends up on Trade Me, I have my reputation to consider so I carefully inspect my second-hand guns and if there’s an issue I sort it.” Jeremy knows his guns; he has over two decades of experience and plenty of bits and pieces in his spare parts boxes. This, combined with his expertise, which includes training with Remington in the USA, means that there’s a chance that minor gun issues can be sorted in store and, more importantly, correct advice can be given if a rifle or shotgun has a major problem. Rivers to Ranges also offers a number of firearm related services including reloading, sighting in and zeroing, custom rifle building and an accurising. Working with proven gunsmiths, Rivers to Ranges can fit suppressors, have barrels threaded and set your rifle up with half-cock. Jeremy is also an accomplished long range hunter and is happy to share his knowledge in this area.

If you think Rivers to Ranges is all about hunting you’d be wrong; saltwater specialist Nick Kirk is a successful fisherman and a member of the Hawke’s Bay Sport Fishing Club. He also holds the Hawke’s Bay record for striped marlin; his 153kg stripy is mounted in-store. Nick is always keen to share his knowledge, tips and tricks.

Jeremy’s other passion is fly fishing. A few years ago I was at a fly casting clinic and Jeremy rolled up and proceeded to impress us with some very accurate placement and perfectly formed loops. He’s happy to share advice on what the local rivers are producing and what patterns are working.

When talking with any of the chaps in store it’s obvious they have a real passion for the gear they sell. Jeremy confided that he believes in selling what he uses; because he spends a lot of time in the field he knows the strengths and any weaknesses a product may have. Jeremy made it clear that repeat business is important and getting the right gear and giving the right advice for customers is the only way to ensure that happens. In many ways that sums up Rivers to Ranges.

The second part of Jeremy’s business is his guided hunting. He has guided managing directors of firearms companies and All Blacks like Israel Dagg and Sam Whitelock. I jumped at the opportunity to hunt on Jeremy’s private block just inland from Hastings. Our target species was red deer and Jem made it clear that there were good numbers of animals where we were heading. We went through what it was I wanted to achieve, discussed my experience, my gear and my shooting ability and fitness. It was a thoroughly professional approach.

I took my 15 year old nephew Jack along and Jeremy kindly provided some gear for him. We had prepared for shots up to 700 yards and I had brought along my semi-customised Remington 700 in 7mm Remington Magnum for the hunt. After a 5am start and a 40 minute drive we swapped the ute for a quad and after a short ride, set up on a prominent knoll as the sun came up. There was a good fog that morning and with virtually no wind to help move it our views were a little obscured. Jeremy suggested Plan B and we moved to some nearby gullies to hunt. I also liked the fact that because I was on private property the likelihood of running into another person was virtually nil. 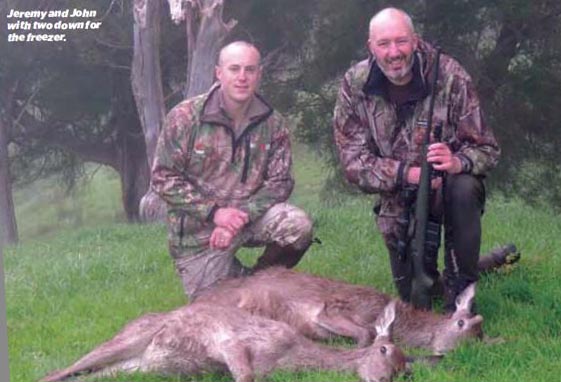 Jeremy and John with two down for the freezer.

Jeremy was full of good advice; “Turn your scope down to minimum magnification” and what timely advice it was. Two spikers and a young hind appeared from out of the bush at just over 50 metres. At first they seemed unsure what to do so I took this opportunity to close my bolt and shoulder the rifle. “Shoot!” came from over my shoulder just as the spiker took off. I swung the crosshair on the front of the brisket and fired. He went down and there was only one faint kick. In my haste I short cycled the bolt and my shot on the young hind was nothing but a click. I cycled correctly this time and took the same brisket aim on the now moving animal and fired just as she stopped. The result was a crease on the front of the brisket. She ran into some bushes and I finished her with a quartering shot to the lungs. Jeremy had a big grin on his face and congratulated me.

Jeremy then field dressed the first deer and took Jack through the process of dressing the second one. Jeremy showed Jack all the tricks and, to his credit, Jack did a great job. The whole hunt was easy and relaxed and when I made this comment to Jeremy he smiled and said, “John, if you want to work harder I can take you to those places as well.” What he meant was that if I was after a tahr or a chamois then South Island alpine guided hunts are also something he can organise. Jeremy offers guided hunts for red, sika, fallow, tahr and chamois and even goats. He can provide gear and firearms plus all accommodation, food and transport. If you want a Kiwi professional guide who will get you in front of good numbers of fair chase animals then give Jeremy Hanaray a call or catch up with him at Rivers to Ranges.

After a 5am start and a 40 minute drive we swapped the ute for a quad and after a short ride, set up on a prominent knoll as the sun came up. There was a good fog that morning and with virtually no wind to help move it our views were a little obscured. Jeremy suggested Plan B and we moved to some nearby gullies to hunt.